Power of the Histogram 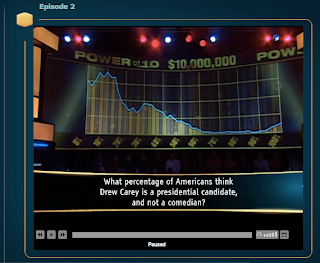 The new CBS game show called "Power of 10" has contestants estimate what Americans think. The host of the game is comedian Drew Carey. One question posed to a contestant was "What percentage of Americans think Drew Carey is a presidential candidate and not a comedian?" The contestant must provide a guess. Low valued questions allow for a relatively large margin of error. For example, a $1000 question has a margin of error of 40%. The next power of 10 question for $10000 has a margin of error of 30% etc. up to $10,000,000 where the exact answer is required. One contestant has already won $1,000,000 on the show. To help them with their guesses contestants are given the results of an audience poll. This is given in the form of the histogram show above.

For the Drew Carey question, the modal guess is 10%, the mean and median are in the 20's.

By the way, the answer to the question above was 9%, well within the contestant's range of 2% to 42%. She won $1,000. Of course the audience's modal answer was much closer, showing the wisdom of crowds.
Posted by Dr.J. at 9:21 PM No comments:

A distribution in the clouds 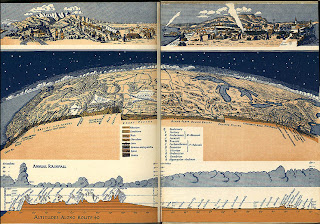 Here is an endpaper from a book displayed at a site on the Visual Telling of Stories via www.strangemaps.wordpress.com. The book is likely about travel across the US with commentary on geology, geography, etc. A close-up is shown here. The elevation profile towards the bottom has, above it, a frequency distribution (in clouds) of the annual rainfall in each part of the country.
Posted by Dr.J. at 11:53 AM No comments: 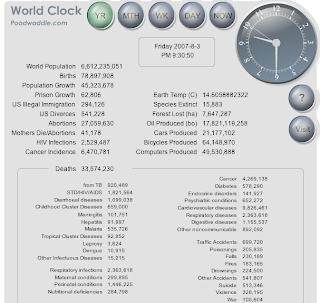 Using data from the World Health Organization, the CIA factbook, the US Census Bureau and other sources you can get an unsettling look at the world. The up-to-the-second version is at poodwaddle.com.
Posted by Dr.J. at 9:17 PM 1 comment: