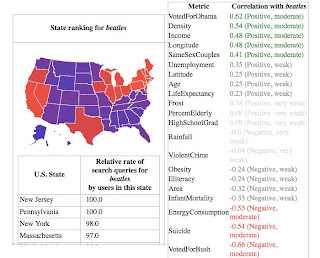 This StateStats site is fun. The states are shown in relative rankings of an entered search term. Here I searched for the word "beatles". Spearman rank correlations are then calculated for these search rankings and state ranking of statistics such as population density, income, or percent voting for Obama. States with the most searches for the word "beatles" are negatively correlated with those states that voted for Bush in 2004 and positively correlated with those states that voted for Obama in 2008. Examples on the site reveal interesting correlation patterns for searches for terms like, prius or nascar. The site warns that correlation is not causation.
Posted by Dr.J. at 8:03 PM No comments: