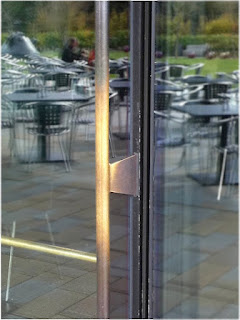 The door from the terrace to the cafe at the De Young museum in San Francisco. Many hands have entered, polishing the pole. Few grab it low, few grab it high. Most open the door at about elbow height. The resulting wear pattern shows a distribution of this height.
Posted by Robert W. Jernigan at 11:38 AM 2 comments:

Here is a proper depiction of a height distribution. From the exhibit "Performance 4: Roman Ondák" that was at the Museum of Modern Art in 2009.

Of course, Sir Francis Galton had this idea over a century ago. See his book on Hereditary Genius on page 28. 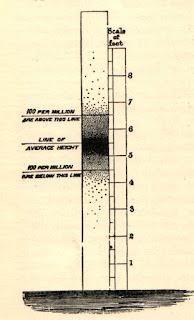 Posted by Robert W. Jernigan at 1:24 PM No comments: 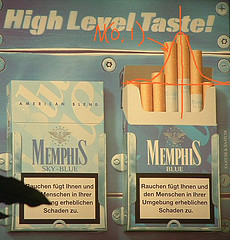 Found on Flickr with the caption "Standard Normal Distribution".

Perhaps it is suggestive of histogram bars often seen with a bell-shape of a normal distribution. But what variable is being measured? See "NO, NO, NO, the Wrong Idea" in the previous post here.
Posted by Robert W. Jernigan at 8:39 AM No comments: 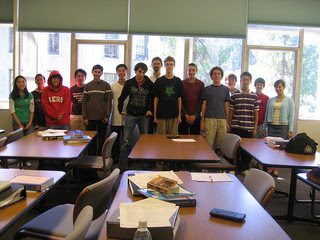 This photo seems to want to depict a normal distribution of the heights of students. If height is the variable of interest, the horizontal axis should be a number line with all the smallest students on the left and those taller would be placed further to the right. If the heights of the students had a bell-shaped histogram we would expect to see very few short students, very few tall students, and most of the students would have heights that fall between those extremes. This photo puts the tall students in the middle and shorter ones on the extremes. Maybe they have illustrated a bell-curve, but no number line is used, so no distribution (normal or otherwise) could be represented.
Posted by Robert W. Jernigan at 12:06 PM No comments: