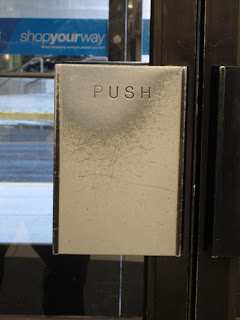 Bell-shaped wear pattern on the exit door at a Sears store. Lots of wear in the middle, less on the right-hand edge. The distribution appears skewed to the right. Would we see more of a left-hand tail if the handle was bigger or does the door open better by pushing on it more to the left than to the right?

See another door distribution in our video here. 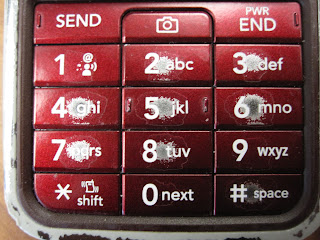 A student's cell phone (thanks Jason) showing the discrete distribution of texting wear. Not many uses of wxyz (9), much more of ghi (4) and mno (6) most likely from Jason's two thumbs resting on these keys during texting. Are the remaining letter sets (numbers) equally likely?

Texting has its own unique spelling and distribution of letter usage. I have been unable to find any published distribution of letter frequencies for texting. Are there any? If they were the same as standard English, the letter sets would have the following frequencies of use:
Of course relative to these percentages, resting thumbs have caused over amounts of wear on ghi (4) and mno (6). The wear also shows over amounts on jkl (5) as well. The others are all very similar as are the wear patterns, except for wxyz (9) that shows the small amount of wear suggested by the 4.66% frequency of use. 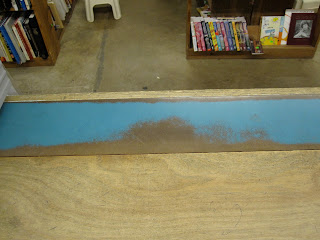 Pattern of wear on a counter top at a used bookstore. The brown plywood is the vertical back side of the counter (the checker's side). The blue laminate top has been worn away by book purchases that are set and slid across the counter as price stickers are read and the purchase is rung up. A bell-shaped pattern of wear is centered on the middle of the counter top spreading its two tails along this back edge where the checker rings up the purchase. 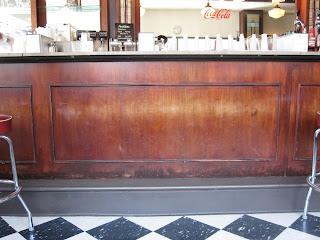 Wear pattern of the knees of patrons who sat at the soda fountain counter of Clinton's Soda Fountain in Independence, Missouri. The wear pattern seems to be lower on the left. Is this from taller or shorter customers? Taller ones might sit farther from the counter and their knees may hit the counter lower. Why just on this one side? Chance or design?