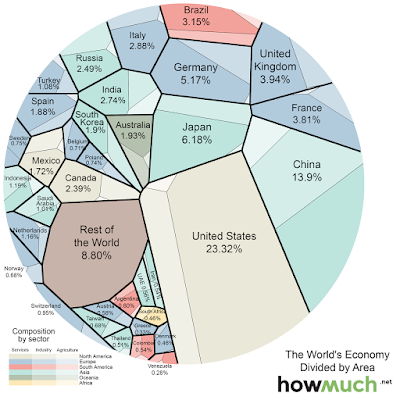 Here is a busy graphic representing the composition of the world's economy. Countries are given polygonal sections proportional to the relative size of their economies. Each sector is divided into three smaller regions: Most lightly colored is Agriculture, somewhat darker is Industry, darker yet, the sub-segment that is greatest for most countries, is Services. Starting with the largest (US) the polygons seem to be arranged in a rough Pareto-chart fashion from largest to smallest in a counter-clockwise fashion. Although, individual countries are hard to locate, those of similar size contributions are somewhat easy to compare. I found it fun to puzzle out comparisons that I found surprising, for example, US industry has about the same area as China's. Mathew Yglesias from Vox points out others:


You can see some cool things here.

This graphic has gotten criticism as being too busy, too unorganized, and too difficult to make comparison, among others. But I do like the puzzle-it-out quality of the graphic. It makes us work a little to understand and make comparisons. I especially like the quote from Andrew Gelman at Statistical Modeling, Causal Inference, and Social Science:


Paradoxically, the best thing about this graph may also be its worst: Its tricky, puzzle-like characteristic (it even looks like some sort of hi-tech jigsaw puzzle) makes it hard to read, hard to follow, but at the same time gratifying for the reader who goes to the trouble of figuring it out.

From howmuch, via Vox, via SM,CS and SS. 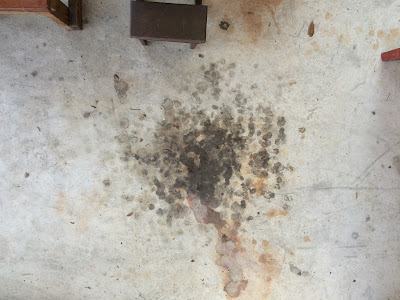 This is a stain on carport floor of my mother's home.  It comes from the the persistent drip of oil from her parked car and the variability of her parking location. When the car enters the carport from the bottom of this picture, the front of the car (and its motor) stops over the developing stain. The stain pattern running from the bottom to the top in the picture is from parking less or more of the car, respectively, in the carport. The left to right stain is from the car entering the carport more to the left or right.

Notice the prominent lines of oil drops on the right side of the stain. It could be from repetitive and quite accurate placement of the car more on the right of the carport. But it could also be a re-positioning of the car more forward or backward after it stopped on an established an entry line. This illustrates the conditional distribution of bottom to top oil placement given a fixed left to right car approach. Notice that it's likely that the floor is not level, indicated by the lighter, more liquid stain running towards the entry of the carport.

What results is a joint, two-dimensional scatterplot of automobile placement in the carport. The overall pattern of the oil is consistent with a targeted, ideal car placement. With a few other assumptions, such as independence of bottom to top and left to right placement, it is possible to prove that the resulting joint distribution is that of a bivariate normal distribution. More on the details in a future post.
Posted by Robert W. Jernigan at 12:00 PM 1 comment: 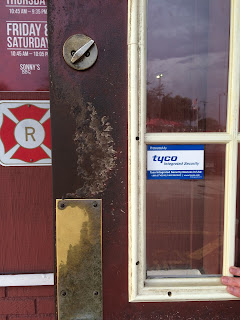 Here's another picture of the entry door to Sonny's BBQ in Sanford, Florida. You can see the vertical wear pattern of the many hands that have held open the door. The most frequent use is on the brown wood of the door. Those hands have left grease and grime that has mixed with the finish on the door producing a mottled white central portion of a bell-shaped curve. The lower tail of the bell-curve comes from the polishing that hands have done on the door's copper entry plate. The break between the mottled white pattern and the polished copper tail seems to fall at the inflection point of the bell-curve. Properties of the normal curve tell us that the wear beyond the inflection point in the copper tail accounts for about 16% of the total wear. The corresponding upper inflection point seems to fall just were the mottled white pattern ends. This also indicates about 16% of wear in the upper tail. These divisions likely correspond to the normal distribution of the height of hands as they open the door, perhaps just below shoulder level.

And so faintly you came tapping... 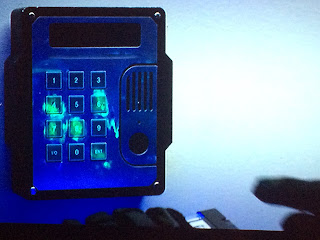 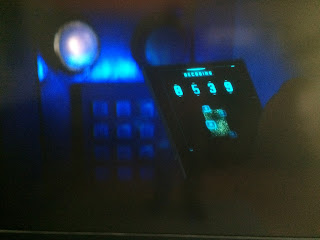 Here are images from two films from 2014. First, from the movie "The Forger" starring John Travolta and second, from "Kingsman: The Secret Service" starring Colin Firth. In both films secret entries must be made to advance the plot. In the Kingsman it is ultimately to save the people of the world from destruction. In The Forger, it is to steal a Monet painting and replace it with a forgery. Each director accomplishes this entry by looking at the residue of fingers on the pin pad keys. In the case of The Forger, these marks of wear and use are highlighted with a spray liquid that is then observed under a black light. This narrows down a four-digit pin number to 1 in 10,000. But in The Forger, Christopher Plummer, who plays the father to Travolta's character, guesses the correct 4-digit pin, 4867, on the first try!

To me, the way the 6 key has a trailing pattern of use, I would have thought it would have been the last digit of the combination. But no. Was this a bad edit, or am I missing something that makes 4867 so obvious in the first picture? In the second image, from Kingsman, I seem to recall a more automated way that the main character ran through the 10,000 possibilities to come up with the correct pin of 8539. It's been a while since I saw that movie, and I can't recall the details.

Either way, patterns of wear and use either facilitate saving the world or robbing a museum. Your choice.
Posted by Robert W. Jernigan at 12:00 PM No comments: 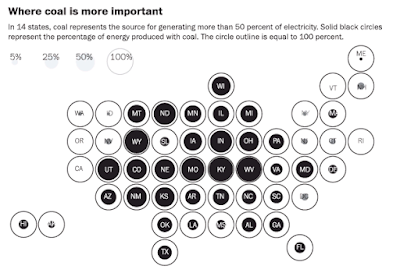 Graphic from the print edition of the Washington Post on August 2, 2015 showing what proportion of a state's total electricity that comes from the burning of coal. Each state's circle represents 100% of the states electricity production. The inner black circle represents the percentage of the total electricity that is produced by coal. This is a nice display, but correctly interpreting such percentages from circles is difficult. Assessing "a lot" or "a little" is somewhat easy, but even correctly divining the 50% value, is something many find difficult and even counter-intuitive. 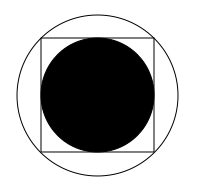 The geometry is correct, but visually interpreting this black circle as half the area of the outer circle can be difficult. Shaded areas of squares might have worked better in the coal graphic. The Washington Post has more maps on other methods of electricity generation here.