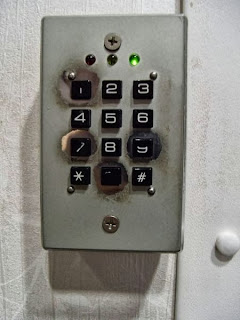 Great security! Too much wear can be a bad thing. From cheezburger.com, thanks Laura.

Simpson's paradox fools many. Percentages can favor women over men across each of several subgroups but then reverse, favoring men over women when the subgroups are combined into one. At one level this seems illogical. We seem to expect that patterns observed consistently for portions of a whole should also apply when the portions are aggregated together into one. This simple view misses lurking variables. In a famous example, graduate admission to Berkeley seemed biased against women when considered overall, but when the admissions were considered by individual departments there was no bias or bias in favor of women. The lurking variable is that "not all departments are equally easy to enter." and "the proportion of women applicants tends to be high in departments that are hard to get into and low in those departments that are easy to get into".

Lewis Lehe and Victor Powell at UC Berkeley have produced interactive applets to illustrate Simpson's paradox. As Flowing Data mentions "Sometimes when you zoom in, you see a completely opposite trend of what you saw overall".

We've considered Simpson's paradox before where even microbes can be used to illustrate it.

Top of the Line 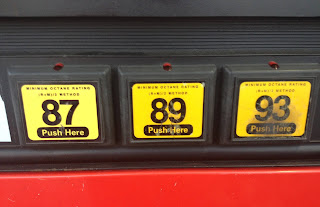 Upscale neighborhood. Greatest frequency of wear is on the premium.
Forwarded by a colleague (thanks Jun). Originally, I think, from Reddit. 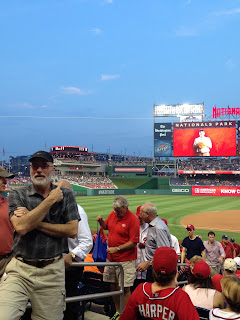 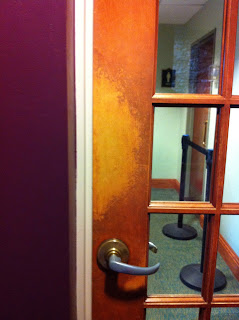 This is a symmetric and bell-shaped pattern of wear on the entry door to the restrooms at Rocky Gap Casino and Resort in Flintstone, MD (yes, Flintstone). We've seen this type of wear often, for example, here and here. People use the handle to open and pass through door, but many, likely on exit, place their hands around the edge of the door to pass through or hold it open for others. They can't reach too high and when they do it seems only fingers are used, leaving little wear.  It's also  uncomfortable to hold it open too low, again likely only with fingers. So most of the wear and likely many whole hands are used between these extremes causing much more wear. Top to bottom, little use, greater use, then little use generates the bell-shaped pattern wear.
Posted by Robert W. Jernigan at 12:00 PM No comments: