In his Sherlock Holmes story "The Man with the Twisted Lip" Arthur Conan Doyle had his character Dr. John Watson notice:


Ordering my cab to wait, I passed down the steps, worn hollow in the center by the ceaseless tread of drunken feet

Above is a detail from the drawing "Twin Staircases in Vitorchianoby" by Rhode Island School of Design  Professor Fred Lynch from his blog. It nicely illustrates Dr. Watson's observation. I found a comparable photograph of such stairs here.

The tread of those ceaseless drunken feet have worn away the stone most in the center and less along the edges. The worn steps give us a profile of a normal, bell-shaped pattern of wear. A pattern we've seen often.

But Design Professor Lynch tells how he included this image along with a drawing of a historic and often reproduced, tourist-popular image of an Italian piazza. When he asked his students to critique his drawings he found that such beautiful and historic images were of less interest to his students than this drawing of stairs. One student noted "one kind of drawing was of what I, the artist had found to be interesting. The other kind were drawings of subjects that others have found interesting". He had made a drawing of an image many people knew well, and were then more critical or bored with yet another rendition of something they had seen often. The stairs, on the other hand, were something not so ingrained in their visual memory. It was an image the artist cared about, not one that history and tourist traffic had made famous and ubiquitous.

It reminded Professor Lynch of a passage from the novel "White Noise" by Don Delilo:

“Several days later Murray asked me about a tourist attraction known as the most photographed barn in America.  We drove 22 miles into the country around Farmington.  There were meadows and apple orchards.  White fences trailed through the rolling fields.  Soon the sign started appearing.  THE MOST PHOTOGRAPHED BARN IN AMERICA.  We counted five signs before we reached the site.  There were 40 cars and a tour bus in the makeshift lot.  We walked along a cowpath to the slightly elevated spot set aside for viewing and photographing.  All the people had cameras; some had tripods, telephoto lenses, filter kits.  A man in a booth sold postcards and slides — pictures of the barn taken from the elevated spot.  We stood near a grove of trees and watched the photographers.  Murray maintained a prolonged silence, occasionally scrawling some notes in a little book.

“No one sees the barn,” he said finally.
A long silence followed.
“Once you’ve seen the signs about the barn, it becomes impossible to see the barn.”
He fell silent once more.  People with cameras left the elevated site, replaced by others.

We’re not here to capture an image, we’re here to maintain one. Every photograph reinforces the aura.  Can you feel it, Jack? An accumulation of nameless energies.”
There was an extended silence.  The man in the booth sold postcards and slides.
“Being here is a kind of spiritual surrender.  We see only what the others see.  The thousands who were here in the past, those who will come in the future.  We’ve agreed to be part of a collective perception.  It literally colors our vision.  A religious experience in a way, like all tourism.”
Another silence ensued.
“They are taking pictures of taking pictures,” he said.
He did not speak for a while.  We listened to the incessant clicking of shutter release buttons, the rustling crank of levers that advanced the film.
“What was the barn like before it was photographed?” he said.  “What did it look like, how was it different from the other barns, how was it similar to other barns?” 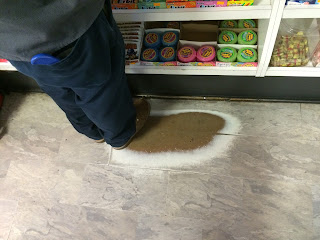 This is an image of the floor in front of the checkout counter at a deli in Rockville, Maryland. Standing and awaiting completion of their purchases, customers have worn away the floor tiles with their shuffling feet, revealing contours of their use. The central brown area shows the concentrated region of the most wear. So frequently has this central spot served customers that the tile has been worn through to its interior, well deeper than its decorative surface. Around that, lesser use has worn off only the pattern of the floor tile. This leaves a white annulus of wear surrounding the central region. Beyond this there is a dirtier area of the floor tile where customers queue up to pay for their purchases. This all results in an image of the somewhat circular contours of the joint frequency distribution of customer foot placement at the checkout counter.
Posted by Robert W. Jernigan at 12:00 PM No comments: 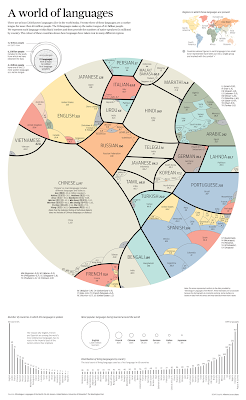 Here is a larger view of the infographic from Alberto Lucas López showing the fascinating worldwide diversity of spoken languages. From the Infographic:


There are at least 7,102 known languages alive in the world today. Twenty-three of these languages are a mother tongue for more than 50 million people. The 23 languages make up the native tongue of 4.1 billion people. We represent each language within black borders and then provide the numbers of native speakers (in millions) by country. The colour of these countries shows how languages have taken root in many different regions.

Here is an image showing more of the marks of our daily actions accumulating to reveal a frequency distribution of use. Above is a view of the trunk of a county sheriff’s car before its spring cleaning. Road grime allows us to see a pattern of the sheriff’s actions. The officer closes the trunk consistently with the same motion targeted at the same place. This results in a tight pattern of use with little variability and few dirty fingers.

Compare these actions with those of the driver below.

This hybrid owner closes the trunk in many ways, on the left, on the right, perhaps with two hands. The erased road grime displays a much more variable pattern of use, almost uniformly distributed across the trunk opening, making the owner’s fingers dirty often. 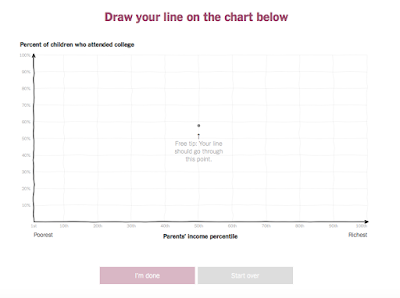 The New York Times column "The Upshot" has an interactive experiment of drawing your perceptions of how poverty affects college admissions. They provide the axes: x = poverty income percentile and y = percent of children who attended college. Your job is to select points to estimate what percentage of children attended college for each parents' income percentile, producing a line running, most predictably, from low college attendance for low income up to higher attendance for higher income. Along the way your line must pass through the point of 58% college attendance for the 50th percentile of income. Is your line straight, concave up, concave down, S-shaped, etc? Draw your guess, they say. The best part is that your guess is shown with a shaded aggregate of over 60,000 others, with darker color indicating greater frequency. It's a great image, but I won't be a spoiler for the game. Much like an image of a percentile regression. Try it out and see for yourself.
Posted by Robert W. Jernigan at 12:00 PM No comments: