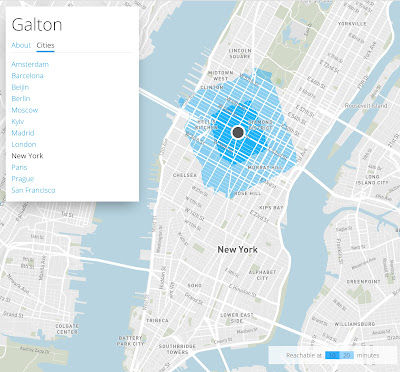 Urbica is a design firm specializing in urban data analysis. They have developed a program called Galton that graphs, for a few select cities, how far you could walk in 10 minutes (in dark blue) or 20 minutes (in lighter blue). The map of Manhattan above shows those regions for a walk originating at Broadway and 42st Street. As you walk NYC you are, for the most part, constrained to travel the grid of avenues and streets. Of course, you cannot travel as the crow flies. If you could, these regions would be concentric circles with a perimeter an equal (Euclidean) distance from your start. But walking the streets, your distance is measured by the city block metric (also known as the taxicab metric or more appropriate here the Manhattan metric). This measures distances constrained along perpendicular avenues and streets. Plotting points of equal distance with this metric from would result in the roughly rectangular (or diamond-shaped) regions shown above. Since the streets and avenues are not equally spaced and obstacles can block our travel, we don't see perfect square or rectangular regions. By the Manhattan metric, circles become squares.
Via Maps Mania.

Next week, we will see directly the results of minimizing the distance traveled in such constrained walking.

From xkcd, a timeline of the earth's temperature from 20,000 BCE to the present, best seen here.


When people say "the climate has changed before" these are the kind of changes they're talking about.

Since the last ice age glaciation, at no time has the climate changed faster than in the last few generations!
Posted by Robert W. Jernigan at 12:00 PM No comments:

Maybe This Information is Beautiful, It's Just Not Accurate 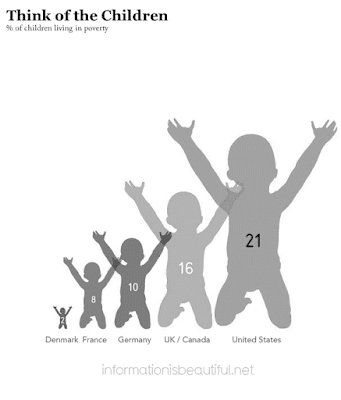 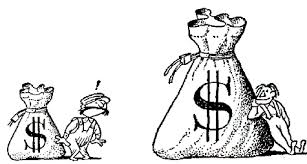 Now the graphic from Information is Beautiful purports to represent the percentage of children in poverty. On the left is shown a small shadow silhouette of a young child with arms raised that represents 2%, the percentage of children in poverty in Denmark. Compare this with the larger silhouette for Germany representing 10%. Even in this flat 2-d outline more than 5 of the Denmark outlines could fit in the Germany outline.  The problem, of course, is that a graphic artist has lied again and doubled both the height and width of the silhouettes to represent these numbers. This distorts any comparisons that could be made with these data. And it gets worse, since we are to understand these are images of 3-dimensional children!

I recall decades ago this, now classic graphic, when it appeared in the Washington Post. The same mistake of displaying data using the same error with the same methods (compare the Eisenhower dollar with the Carter dollar). You would think....

Location is Time or Money 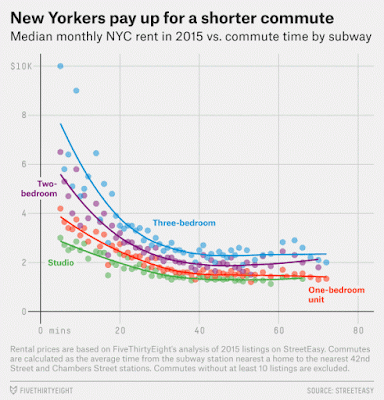 Using data from over 175,000 rentals from the real estate listing service StreetEasy, the site FiveThirtyEight asks the question:


How much would you be willing to pay to shave a minute off your commute? For New Yorkers, the answer appears to be around $56 per month. That’s how much more New Yorkers pay in rent, on average, for a one-bedroom apartment that’s a minute closer by subway to Manhattan’s main business districts.

They plot median monthly rental versus commuting time to the 42nd Street and Chambers Street subway stations. They fit, what appear to be non-parametric regressions, curves to four different groups of rentals: studios, and 1- ,2- , and 3-bedroom apartments. As expected, rental prices fall with a longer commute. From the 1-bedroom curve they estimate that, on average, a one minute shorter commute costs around $56 more a month.
Posted by Robert W. Jernigan at 12:00 PM 1 comment: