What pie did you have on Thanksgiving? 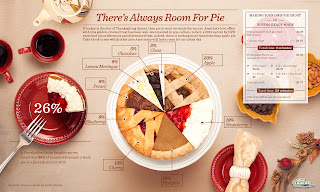 What is your favorite pie? Did you have it for Thanksgiving? Here is a pie chart based on a National Public Radio report of a survey of America's favorite pies. The ultimate pie chart is, of course, here.

I'm taller than you 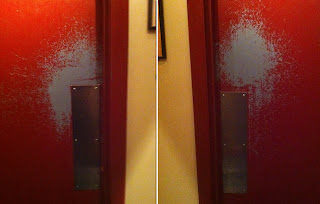 These are doors at the Rockville, Maryland location of the restaurant Matchbox. They are facing restroom doors near the bar. The one on the left of this picture is the door to the women's room. The one on the right is door to the men's room. Notice the scatterplot wear pattern of hand placement on each door. Men, generally taller, have worn away the paint on the door higher than that worn by the, generally shorter, women. Accurate measurements of the heights of the center of each wear pattern would give us estimates of height of hand placement on the door, likely to be about shoulder height as customers push on the door. Of course, being restrooms accurate measurements would just be weird! As it is, standing their with a camera was weird enough!

Similar door scatterplots can be found here and even another restroom door here.
Posted by Robert W. Jernigan at 12:00 PM 7 comments:

A dynamic sculpture called Windswept by artist Charles Sowers showing the vector field of wind direction on the side of the Randall Museum in San Francisco. The description from the artist's website says:


Windswept consists of 612 freely rotating wind direction indicators mounted parallel to the wall creating an architectural scale instrument for observing the complex interaction between wind and the building. Wind gusts, rippling and swirling through the sculpture, visually reveal the complex and ever-changing ways the wind interacts with the building and the environment.

The measurements of such a vector field (including magnitude and direction) can be modeled and analyzed using directional statistics, like the wind swept pine needles of last week.

Pine Needles in a Circle 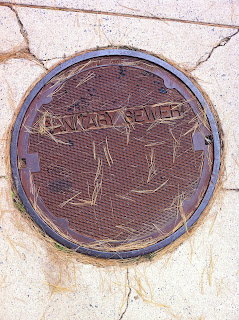 A view of the cover of a 'sanitary sewer,' (and why would you want any other kind?!). And as promised last week, notice the accumulation of pine needles around the edge of the cover. On this day the wind was quite gusty, blowing along this sidewalk from the bottom of the image to the top. Due to this wind direction, many more pine needles have accumulated and piled up around the cover at the bottom than at the top. This forms a histogram of the frequency distribution of wind action distributed around the circumference of the sewer cover.

If we had data situated around the circumference of a circle we could display it as a circular dot plot as shown below from the book "Circular Statistics" by Fisher. These are arrival times, on a 24hr clock, are for 254 patients at an intensive care unit. Few arrive in the morning, many more arrive in late afternoon and early evening. 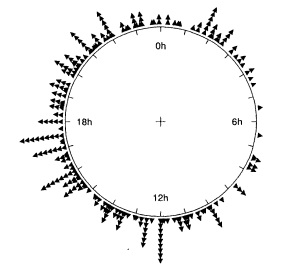 An estimate of the density of circular sample can be computed using something like the code for a circular density curve in the programming language R, as shown below. 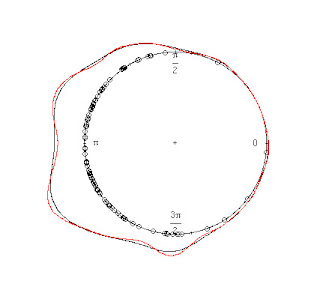 Such graphical tools are the beginnings of modeling on spheres and other manifolds studied under the general heading of directional statistics.

A probability density function defined on the real line is sometimes wrapped around a circle. We have earlier seen that the results of such wrapping give rise to the characteristic function, a fundamental tool of probability modeling.
Posted by Robert W. Jernigan at 12:00 PM No comments: