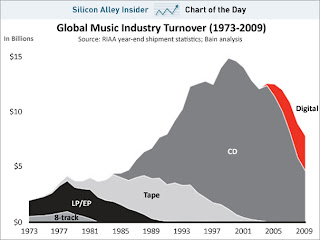 This graphic has gotten a lot of play in the past few weeks. It purports to show the collapse of the global music industry. The image is discussed on Junk Charts where attention is directed at the mystery of the decline in CD sales around 2001. An interesting image, but as Michael DeGusta of Business Insider shows not all is what it seems. He details the graphic's recent history and notes several problems: It's really only US sales figures and it's not adjusted for inflation, among other problems. He provides other images of music sales data and this correction of the chart in 2011 dollars: 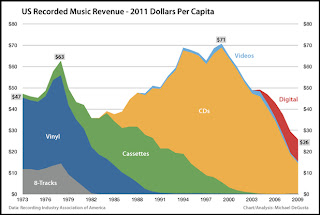 Here we see a problem with interpreting such an image. One commenter on Junk Charts notes:

"We might be able to tell if the Digital Sales area was not hidden behind the CD Sales area. Hence the problem with area charts."

To which another responds with the correct answer:

"Digital sales isn't hidden behind the CD sales - its stacked on top. I know it looks like a range of mountains, but it isn't. I think. That's the perceptual problem with charts stacked like this."

Yes, it is not one curve sitting behind another, like a range of mountains. The histogram information is stacked on top of the other curves. Stacked histograms are often used when displaying time dependent data, like for following. 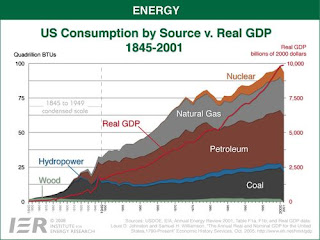 But not always.
Here is an image of a "living histogram" that organizes men and women of different heights into frequency classes.

The men's histogram is easily seen. The women (dressed in white) are added or stacked onto the men's histogram classes. It does give an indication of the population heights for both, but it's more difficult to view the women's histogram alone. The same holds for the graphic of music sales. But I want to see the time axis extended further into the past, showing sales of 45s, 78s, and then even Edison wax cylinders!
Posted by Dr.J. at 7:23 PM No comments:

"Mnemonic" is itself a (Poisson) mnemonic

See The Futility Closet. I can now use the Poisson distribution to help me remember how to spell "mnemonic"!
Posted by Dr.J. at 10:45 AM 11 comments: 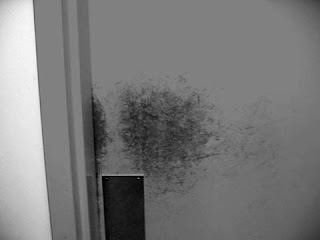 This is a view of the inside exit door of the men's restroom at a movie theater in Germantown, Maryland. (I had to be careful with the camera in there!)

Users of this restroom exit by pushing on the door and proceeding around to the right towards the theater. As the men do so, they don’t seem use the metal push panel provided. It doesn't seem to be designed properly for mens' heights. Instead, the men seem to push higher on the door wearing off the red paint. We see a two-dimensional spatial distribution of their hand placement. The wear pattern shows both the horizontal and vertical placement of their hands as they push the door to exit.

I noticed the open exit door on the women's room. I couldn't get the picture there. But the women's door had much less wear on the door. They seemed to use the metal push plate to open the door. It was mounted more correctly for their height or perhaps the women were in less of a hurry.
Posted by Dr.J. at 11:03 AM 1 comment: 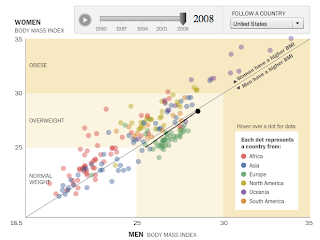 Much like Gapminder highlighted in a previous post, the Washington Post has created a scatterplot of national body mass indices (BMI) overtime. Can you find a country whose national BMI decreased over a stretch of time contrary to almost every other country?
For an individual, body mass index is not the most valid index of how overweight you might be, despite the claims of the Centers for Disease Control. Keith Devlin points this out well in his column for the MAA.
Posted by Dr.J. at 1:51 PM 1 comment: