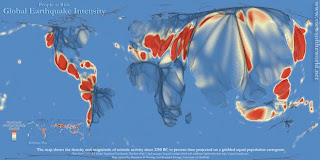 A map of global earthquake intensity, showing magnitude and density of seismic activity weighted by population (larger version here). According to Views of the World this map allows us "to understand the earthquake intensity in relation to today’s population distribution, and thus gives an idea of where most people are of risk related to seismic activity." The algorithm uses kernel density estimation followed by a density equalizing algorithm.
Via The Map Room.
Posted by Dr.J. at 5:44 PM No comments: