Six Decades of Most Popular Girls Names by US State 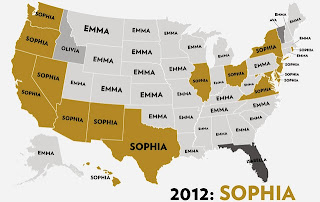 Animated maps showing the most popular girls names from 1960 to 2012. There are some quick country-wide shifts from one year to the next. Consider Lisa in 1969 and Jennifer in 1970.
Posted by Robert W. Jernigan at 12:00 PM 1 comment:

The Best American Infographics of 2013, a new book compiled by Gareth Cook, has an introduction by David Byrne. Byrne says a good infographic is "elegant, efficient, and accurate," but also revealing when they can "engender and facilitate an insight." The book is such a collection. Here is one showing the frequency distribution of births throughout a calendar year. 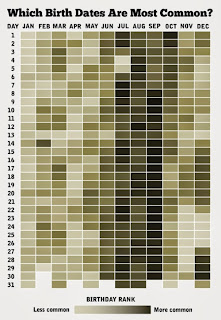 And another showing how the DNA analysis of canine genes cluster into four broad categories of dogs. 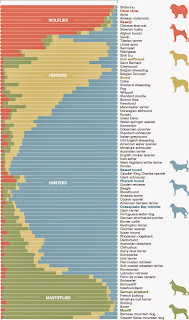 The video above gives more examples. It's easy to get engrossed in this elegant and insightful book. 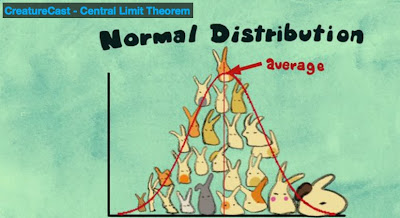 A cute video illustrating the Central Limit Theorem in a "Creature Cast" by animator Shuyi Chiou via the New York Times. Here a normal distribution is presented correctly. On the horizontal axis is a number line of the weight of rabbits. Small rabbits are on the left and large rabbits are on the right. A smooth curve of their relative frequency of occurrence is also shown. The curve is low on each end indicating that at each extreme there are few small rabbits and few large ones. The curve is high in the middle where the relative frequency of average weight rabbits is large. In this case, the population distribution of rabbit weights appears to follow a normal curve. In previous posts, we have seen this number line aspect of such a normal curve indicated correctly and also incorrectly.

In illustrating the Central Limit Theorem the animation goes on to examine the average weight of groups or samples of rabbits. 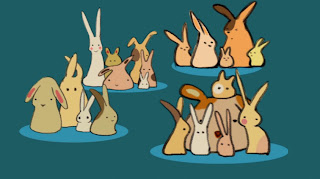 Such average weights of samples builds up the sampling distribution of these averages. The Central Limit Theorem tells us that these group averages will more closely follow a normal distribution as the group size increases. An illustration starting with the bi-modal distribution of dragon wings is also shown. 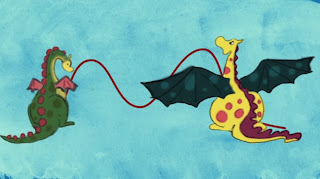 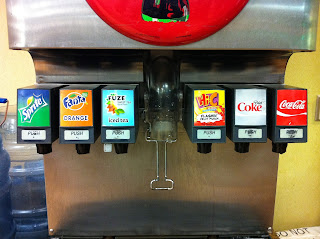 A soft drink dispenser on campus shows the ranking of student tastes. In order of the wear resulting from their frequency of use: Coca-Cola, Diet Coke, Fuze Sweet Tea, Sprite, Fanta Orange, and the little used HiC Flashin' Fruit Punch.