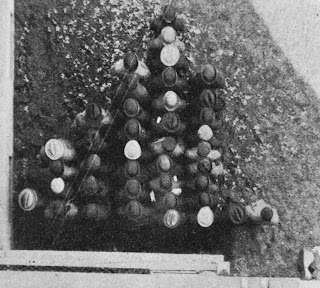 Here is the earliest "living histogram" picture that I have found. It is from a paper by C.B. Davenport in The Popular Science Monthly, September 1901. It is more easily found on-line at Google books in the text Graphical Methods for Presenting Facts by Brinton(1914) on page 165. Davenport placed forty University of Chicago students into columns according to different height classes. What we see are the top of their heads or rather their hats!
My previous earliest finding of a living histograms occurred in a paper by Blakeslee(1914). A link to it is available in the references of a genetics review paper by Crow.
The term "living histogram" was coined by Joiner(1975) in the International Statistical Review. Joiner's image, Blakeslee's image, and an update by Strausbaugh(1996) can also be seen in a paper by Schilling, Watkins, and Watkins "Is Human Height Bimodal?" from The American Statistician.
Posted by Dr.J. at 1:59 PM